We've had tons of fun touring our new CD Back to You around the Valley, and we are now announcing our CD Celebration Party - come join us at the Nepean Sailing Club on Sunday, January 29 2017, from 6-9pm. 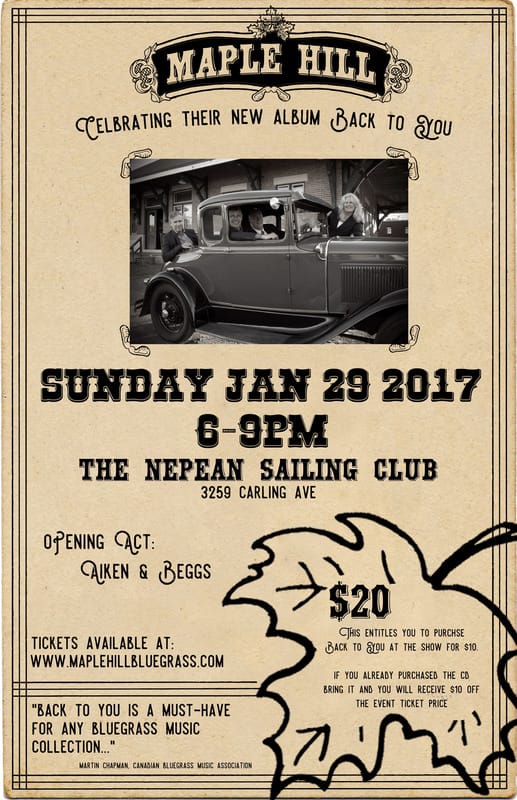 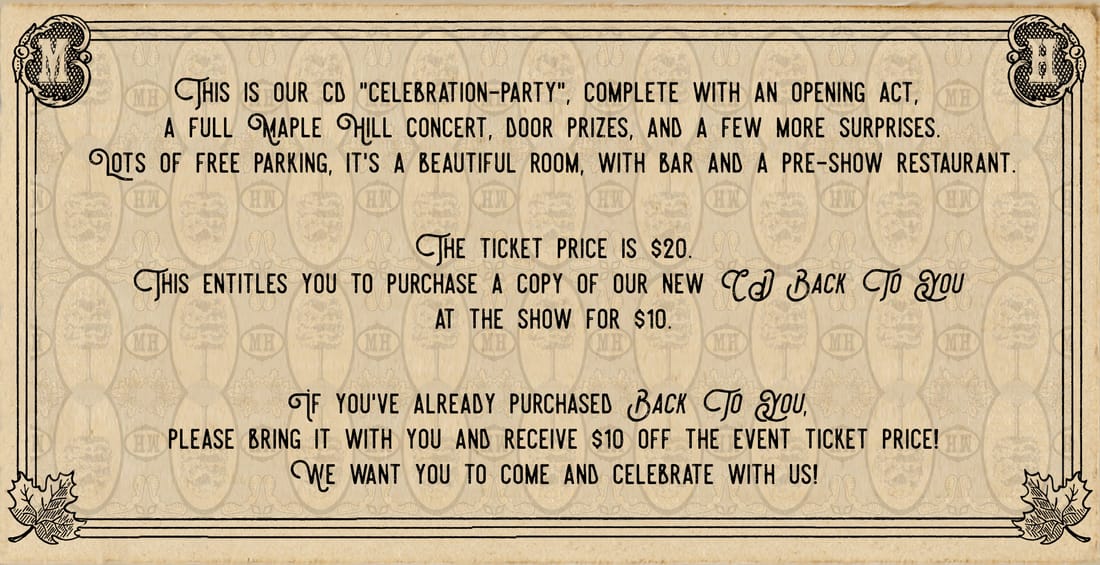 Maple Hill have a number of festivals and shows coming up in 2017...stay tuned

Garry Greenland is presented with Award at the CCBA's 2013.

We're looking forward to playing some festivals new to us this summer, and pleased as punch to be returning to others.
Find us at:
Ottawa Grassroots Festival, April 27, 2013
Quinte Isle's Bluegrass Festival May 31 - June 2 2013
Holstein Bluegrass Festival Aug 9,10,11 2013
Sand Road Bluegrass Festival at the new location in the Maxville Fairgrounds Aug 15-18, 2013
Heritage Mica Days, Murphy's Point Prov. Park Aug 31

Maple Hill played to a wonderful audience at St Martin's Church for the 6th Annual Ottawa Opry in support of Amnesty International. 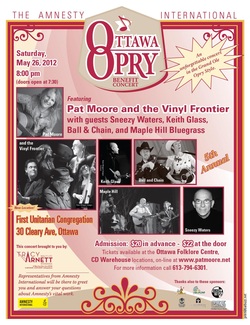 News Release:
ANNOUNCING THE LINE-UP FOR THE 2012 5TH ANNUAL AMNESTY INTERNATIONAL OTTAWA OPRY!! This year the Opry will have a new home at the Unitarian Congregation, 30 Cleary Ave in Ottawa's West end (west of Westboro). Joining Pat Moore and the Vinyl Frontier are...(drum roll please....) Sneezy Waters, fresh from having just rel...eased a brand new CD, the amazing and versitile Keith Glass (Prairie Oyster's lead guitar player and writer, and a great vocalist in his own right! Ball and Chain, the zany and very talented duo who have captured Ottawa and Louisiana's hearts! Maple Hill, an award winning bluegrass band featuring Garry Greenland, a much sought after musician and teacher of all aspects of bluegrass (www.maplehillblugrass.com), and again by popular demand Garry is back as our MC - keeping the show rolling. MAny thanks to our Sponsor Tracy Arnett Realty Ltd, and to the Social Justice Committee at the Unitarian Congregation!! Show time - Sat May 26, 8pm. Doors open at 7:30. Tickets available soon. FOr more info email me at patmoore at patmoore dot net. Check out www.patmoore.net.

We're so very happy to announce that Kevin Golka is now officially a member of Maple Hill, making our return after 20 years complete!  Check out our band bio, and Kevin's page as well.  Kevin continues to play with the ever so wonderful Concession 23...it's all good, it's all fun, it's all great bluegrass! 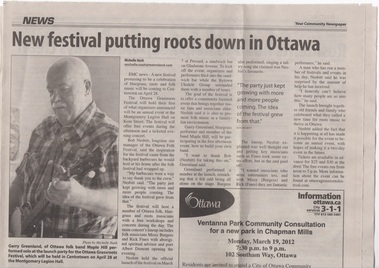 Kudos to Garry Greenland for putting on a great workshop on how to build a band. Lots of positive feedback.

Click on the image to get a larger view.

The Ottawa Grassroots Festival was a great success.  Thanks to Bob Nesbitt and his team!
Check out their website.

We had a whole lot of fun performing our first showcase in ...many years.  Pat's rendition of  Russel Smith's song  "Anger and Tears"  touched a lot of people - thank you for your feedback; we'll have to include it in the next recording!  Pat's clear voice and use of dynamics in telling the storydraws you right in.   "I'd Rather Die Young" with Garry on lead was another favourite.  Rich harmonies, driving rhythmn, and backup and lead playing by Sean and Kevin were the perfect touch.

All in all it was a great weekend!  How wonderful to see so many familiar and friendly faces  - too many to name.  Jamming to 3am with our friends from Concession 23,  Larry Miller, Lorne Buck , and others who came along was a highlight! It's great to be back in the saddle again.

We know many festivals book more than a year in advance, so we'll have to be patient getting back into the festival circuit, but festival promoters take note: Maple Hill is back, and ready to bring top notch entertainment to your audiences.  We're also well experienced in conducting  workshops - talk to us about that feature of our offerings.

See you on the road,
Garry, Pat, Kevin, and Sean.